As a Mama I have the standard worries: Is he breathing!? Am I doing this right? Should I be doing more, less, or the same of ___?

I think that’s normal, and with each passing day I get a little more confident in some things, and I start to worry about a whole host of other things related to raising this tiny human. Big picture stuff.

Here’s a few that rattle around in my head on any given day:

As a kid I remember being picked on. It was not cool to be the tall girl with glasses. Kids can be so mean about little things, and even things you might not be self-conscious about start to make you feel awkward. When I was growing up, the taunting stopped when you left school. But not anymore. It’s online, in social media, in text messages and blogs. Do I worry Merfbaby might be picked on? Yes, of course. But, more than that I fear he could be the one doing the picking, or standing by watching another kid be on the receiving end of a bully’s harsh words. I can’t protect him from everything, but I’m determined to give him solid life tools.

Merfman and I love people watching, next to napping it’s probably our favorite hobby. It’s so interesting to sit back and watch the world spin, and see how other people are doing life. One constant observation is the rarity of face to face social interaction. We were at dinner a few months ago, and we noticed the family sitting at a table near us waiting for their food. Dad was nose-to-screen with his smart phone. Older brother transfixed with a gaming-thingy. Younger brother glued to a tech pad. And Mom was staring off, looking sad. This scenario continued for a looong time, they never look up or said a word to each other.  I know Merfbaby will be far more familiar with technology during his childhood than either Merfman or I were, but I don’t want it to consume him. Merfman and I were both allowed to watch TV as kids, and some shows were off limits, same with video games. It’s part of our culture, I can’t stop it but we can help him to learn self-control. The dinner table is for eating and connecting, face to face. Sure, Merfman and I have jobs where we’re with our phones 24/7 but we try to make each other a priority when we’re eating. Same goes for Merfbaby.

Since we’re living like no one else right now, so we can really live like no one else later, we’re working hard to change our family tree. There’s a saying that you should leave your kids enough money to do something, but not too much money to do nothing. We want him to learn the value of money, and learn from our financial missteps. In our cashless and debt heavy society we want him to have peace and freedom with money. Understanding that it’s a blessing and we have to use it wisely.

I was a “good” student. Not because my parent’s forced me to be, or put crazy expectations down. Mostly because I wanted to do well in school. It didn’t always come easy, but I worked hard. I have no idea what kind of student Merfbaby will be, and I don’t know how he’s going to be educated yet. Maybe homeschool? Maybe co-op? Maybe public? Private? We’ll take that as it comes, but I do wonder about his learning journey. I want him to have a healthy blend of traditional education and hands on experience. Call me hippie-mama but I’d love to spend a few months traveling the US teaching him US history hands on, like actually going to the places you read about in the books. Nuts maybe, but probably pretty awesome too.

This is a big one. Merfman and I are believers, and we pray Merfbaby follows our example and shares our beliefs. I won’t get too high on my soapbox, but the meat of it is this: the world is hard and scary and crazy. It’s probably going to keep heading that direction, right? I have my faith, and the world still freaks me out and makes me sad. But, life would be so much harder NOT having my hope in God. Life is short, knowing there’s a point and a plan to all of this stuff helps.

I guess this sort of goes with the faith thing. I want to raise a human that’s good, and kind, and compassionate. HOW do you do that? I can’t make him be something. I just have to set out the breadcrumbs and pray he follows them, right? 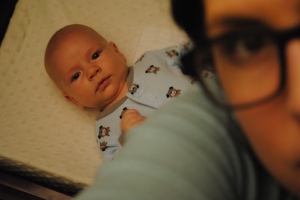 See what I mean, big picture stuff. This is where I think and pray, doing the best I can to be a good example of life for my little tiny human sponge. Woosh, no pressure, right?