A month?! But, I just finally finished writing his birth story! 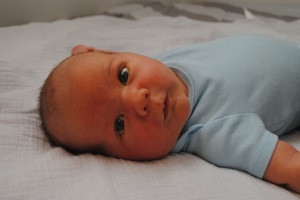 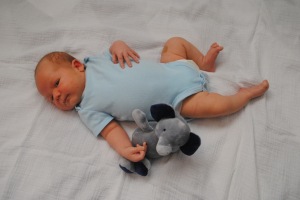 Health:  He had jaundice when he was born and we needed to do at home UV light therapy. At the time it was annoying, but it was easy and I’m so thankful it’s resolved. Charly has A+ blood, and I’m O+ which is why he was jaundice. He started getting baby acne last week, but it’s not too bad. He still has his hair!
Sleep: He’s a good sleeper thankfully. His longest stretch is 3.5 – 4 hours normally the first part of the evening, then 2ish hours after that. Mostly 2 – 3 wake ups a night, but he settles down back to sleep with almost no help after each feeding. I can tell he won’t get the same nap schedule Riley did as a baby, but when we’re home he’s getting good solid naps in his crib. At night he’s still in our room in the pack n’ play – and will be for a while. It’s a pain having to go up and down the stairs all night, I’d rather just have him next to me.
Nursing: Going well! The Peditrician suggested I pump and give him a bottle a day – which I do a few times a week. I was so excited the first time he took a bottle at a week old – 3oz! Most women are thrilled breastfeeding works, for me when Riley refused a bottle it was so stressful I didn’t leave him overnight until he was a year old. I had to be with him constantly. A baby that can take a bottle is a whole new world to me! So breastfeeding is going well – and since I nursed Riley until 15.5 months it doesn’t feel unfamiliar. Charly eats well, but he’s still learning to latch correctly.

What Charly is up to: Eat. Sleep. Poop. He’s starting to be more alert and awake now which is fun. I’m trying to keep him on a 2-3 hour routine with EASY. We’ve been out and about quite a bit since we try to get Riley some activity every day. It’s been pretty hot and miserable which makes it hard, but we try to get outside in the morning and watch a movie at home in the afternoon. 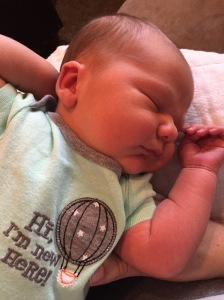 PostPartum: I think my recovery was much easier this time around. I knew what to expect so that helped. My hormones are still out of whack – but that’s to be expected. I have had to check my emotions a few times, mostly just feelings of irritability, probably from lack of sleep more than anything. No baby blues, which is good! I head back to see my doctor for my 6 week check up in 2 weeks, but so far I feel good.

Thoughts: A few times a week, sometimes a few times a day I stop and consider this life I have. Am I really old enough to be married, own a house and have TWO kids!? When did I grow up? I feel like college was just the other day. Last weekend I went back to my high school for an alumni water polo game. It was surreal being back on campus, how was that 15 years ago? I’m so thankful for this little family, and I love Charly and I know he’s going to perfectly round out our little gang.