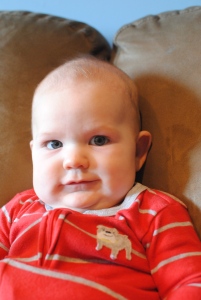 Weight: 19.3 lb (75%) and 28.5″ (98%). He’s been so active this month so I’m not too surprised that his weight is a little down. But he’s still eating well and nursing for long periods, undistracted. Doctor said everything looked good!

Health: Two bottom teeth! The first came through on New Years day. The second one followed a few days later. Teething just like Riley, but he seems to handle the pain much better. We all had a cold this month, lots of runny noses and congestion. 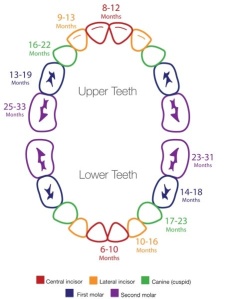 Sleep:  We’re SO close! I was really hoping he’d had doubled his birth weight by this point, but not yet. The days we hang out at home and het gets really solid naps are awesome. He’ll nap from 1.5 – 3 hours depending on how long his morning nap is. Sometimes he’ll take 2, 1.5 – 2 hour naps and then a 45min evening cat nap. Bedtime is 7pm. And I’ll dream feed him between 9:30pm and 10pm before I got to bed. Some nights he’ll sleep through the night until 7am/8am. Other nights he’ll wake at 2am or 4am to eat, and then go back to sleep. Because his night waking is random I’m sure it’s because he’s hungry. I typically let him fuss for 5min before I go down to feed him, just to make sure he’s actually hungry. He’s falling asleep on his own, and sometimes I’ll have to sit in the room until he calms down, or “sush” until he’s relaxed.
Nursing: Going well, I’ve gone back to feeding him on both sides, just to make sure he’s really getting full feedings. Sometimes he takes both, sometimes not. Teething has made way for biting, not cool. But we’re still doing ok. He started solids this month. I can’t keep food way from him! If he’s sitting on my lap he’s clawing at my plate to get handfuls. He loves sitting in the high chair during meal times and will eat anything I give him. So far he’s had: avocado, banana, broccoli, blue berries, raspberries, green beans, sweet potato, carrots, red potatoes, Dave’s Killer Bread (toasted), yogurt, steak and pot roast. Meat is probably his favorite. Which makes sense, red meat was one of my major cravings when I was pregnant. Funny – since I was vegiterian when I was pregnant with Riley, how stuff changes! We’re doing Baby Led Weaning with him, like we did with Riley. It’s much less stressful the second time around. Plus, since I’m doing Whole 30 I have tons of BLW friendly food around.  I haven’t offered him water yet – I was at target yesterday and didn’t find the sippy/straw cup I wanted.

What Charly is up to: We are for sure in the sweet spot. He’s happy and content. He’s sleeping and napping pretty well and can roll around to get to toys he wants to play with. I’m excited for him to sit up, soon I hope. He’s much more of a roller than Riley was. He’s so happy when we go in to get him after a nap, or when he wakes up in the morning. Watching him discover food has been really fun too. He’s generally a really happy, chill and content baby. 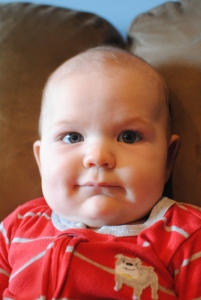 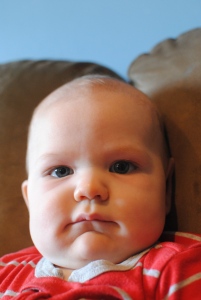 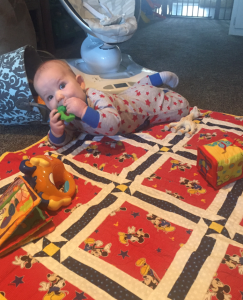 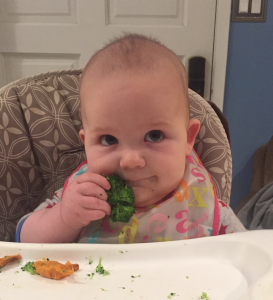 PostPartum: I had my Women’s Wellness exam this month, and all is well. I’ve still got like 18lbs to go before I’m back to my pre-pregnancy starting weight. I seem to be holding onto it longer than last time around. But I was lighter when I got pregnant, so maybe it’s all just the numbers. My tummy is still hanging out, and some weight around my hips…oh, and my nursing situation makes me hold extra weight up top. I have to get it together and get fitted for a new nursing bra. Even the ones I was wearing with Riley at this point are too snug. Just so dang expensive. But, for something I’ll be wearing for another year, probably justified. I’m not back to working out yet. I just can’t make time for it. I’m eating really well, and constantly packing and cleaning around the house so it’s not like I’m not active. I miss a traditional work out – and I’ll get back to it, this just isn’t the time.

Baby Gear: Lots of teething toys. Highchair. We just got a new to us Bob Double Stroller, never thought I would want one, but Riley still really likes the stroller. Ergo. His lovie (a bear) we call Lil’ Oso.

Thoughts: The coming weeks and months are going to be crazy. Like I was telling Kelly the other night – our life is so unbalanced. We don’t see each other very much because of how his schedule is, and that bothers us both. We’re looking forward to moving and getting more quality family time together. I try to take photos and videos of the kids, but it just doesn’t make up for the personal time. I can’t wait for weekend adventures and family dinners.