Wow, that 1st month went fast. I feels like we just brought him home. Crazy. 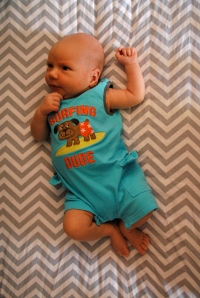 Weight: I’m not sure what he’s weighing, we have a Dr appointment in a few weeks so we’ll find out then. I know he’s growing…he’s just about done with his 0-3 clothes. They almost don’t snap anymore. Some brands of his 0-3 clothing stopped fitting him 2 weeks ago. BIG boy. Not sure about my weight, I have my post-partum appointment next week. With the support of my wonderful Merfman I braved the dressing room and got 2 new pairs of jeans (non-maternity, whoo!) and I feel SO much better wearing real clothes. Yea, the size is the largest I’ve ever purchased, but I care way more about how I feel than what that number says.

Health:  So very thankful for a healthy baby. His cord stump finally came off! He has a very cute belly button now :) Baby acne is still hanging around and he had some cradle cap for a few days but that’s gone. Almost all his hair has rubbed out on his head and it’s starting to grow back in. Not sure on the color yet, still has blue eyes though! He’s wheezing/congested in the early morning, around 3:00am. I think it’s from the dry air in the house since we run the A/C. The other night we hung out in the steamy bathroom and that helped so I set up the humidifier last night. I hate hearing him stuffy :(
Sleep: Before you ask…he’s not sleeping through the night yet. Ha! That’s the #1 question I’m getting from people ;) We have a pretty consistant schedule with his first stretch of sleep being the longest at night at 3.5 – 4 hours. Then it’s 2 – 3.5 for the rest of the night. Since he’s a month old I checked with my Baby Whisperer book and he’s still on track for his age and his EASY schedule. I was telling Merfman that the nightly wake ups are hard, but it’s doable. I’ve gotten way less sleep in my life…ahem, college. I’m still sleeping, it’s just broken up. I know it would be so much harder if we had a baby with colic. Merfman is up at 3:30am or 4:30am most mornings for work so we see him off since we’re normally up for a feeding.
Nursing: I feel like it’s going really well, and we’re getting the hang of it. I can see why some women stop within the first few weeks of breastfeeding, it’s hard. It doesn’t feel magical and it hurts until your body gets adjusted. It’s all about teamwork and you and the baby have to get on the same page. I’m getting more confident and comfortable so nursing in public is getting easier, even if it’s just in the lounge of a public bathroom. You totally have to get creative though!

What Riley is up to: He’s much more alert! When he looks at us I feel like he’s “seeing” us. We’ve had a few smiles and some very flirty looks :) He discovered his reflection last week and had his first swim in Grandma and Grandpa’s pool! 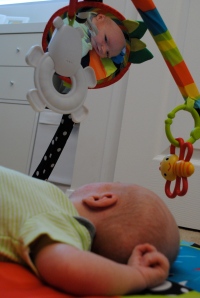 Who’s the fine looking baby in the mirror? 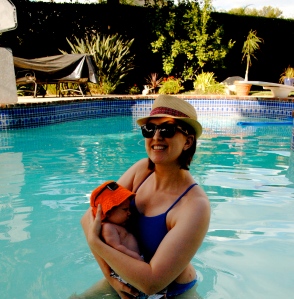 BIG moment for me! As a lifetime lover of the water I was so excited to introduce Riley. He’s a fan :) 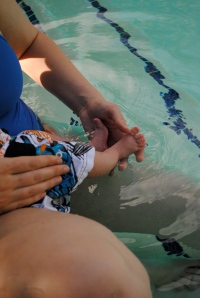 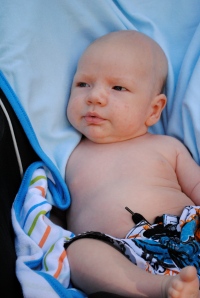 PostPartum: I’m feeling more myself each day, but I’m also feeling like a reinvented version of me. Make sense? Becoming a Mom totally changes you, but in the best ways. Accepting my new body and all the differences is a big step, but the emotional changes are even bigger. The momma-bear thing kicks in hard and you look down at the tiny human and know that you would defend him with your life. So crazy.

Baby Gear: Activity mat. He’s loving that mirror :) Size 1 diapers. He’s got a very narrow waist, but the newborns aren’t quiet keeping up with the “output” knowwhatimean? Ford EDGE. So, we got a new car on Saturday. Merfman wanted to make some changes to the family fleet which would have made my Mini the primary family car. It’s perfect for me and Riley, but doesn’t function well for the 3 of us. As sad as I was, I said goodbye to ICEE…I asked them to find her a good home. I loved that car. So, for Riley’s 1 mont birthday he got a new car! It’s really nice and has amazing suspension, not to mention all the other bells and whistles…leather, heated seats, nav system. Fancy. It’s going to be in the family for a long time so we decided to make it worth it. Riley likes his new car :)

Thoughts: Going back to work. Oh man, I had no idea how even the thought of leaving Riley makes me all sweaty and teary-eyed. Mama hormones much? I’m really hoping the bossman and I can figure out a plan since I can’t even imagine leaving Riley with someone else for 40+ hours a week. I know so many Moms that make it work, but I just don’t think I can do it. The thing that gets me is…at the end of this year…someday when Riley is in school…at the end of my life…will I regret not getting him nanny or will I regret missing out on these first months/years of his life? In the bigger picture what matters more? I know we’ll figure it out but I had no idea it would be this hard.