Health: We’ve been blessed to have such a healthy little dude. Other than one ear infection, some teething and finally getting him on a regular chiropractic schedule for his digestive issues it’s been a great year in the wellness department. There was that one random trip to the ER when he wouldn’t stop throwing up…#newparents, but overall he’s been great. I credit breastfeeding and building his immune system. Meaning: I don’t sanitize everything he touches. Yea. Truth. We still have so many milestones to hit: molars, chicken pox (do those still exist?) and the dreaded cold sharing from other kiddos. But we’ve had a really great healthy year.
Sleep:  Still rising with the sun at 6:00am. Mostly 5:55am. On. the. dot. How do they do that? Bedtime is between 7pm and 7:30pm. Sometimes if his afternoon nap goes late he’s up until 8:00pm ish. Kid likes his sleep and I’m thankful he’s still taking a morning and afternoon nap. Those go from 1hr on a short nap to 2.5 hours. I think he’ll start moving to one long afternoon nap soon, but I’ll let him guide that. I still need morning nap to get myself dressed and get some work done!
Nursing: We made it to a year! Still 4x a day. Wake up. After morning nap. After afternoon nap. Before bed.

What Riley is up to: Saying “da” (dog) “bud-ee” (buddy) “itsy” (betsy) “na-na” (banana). Clapping. Standing for a short time. Walking when he’s holding onto something. Walking when you hold his hands. He still loves the water. We’ve been spending a lot of time around and in the water since it’s been so warm lately. He giggles and splashes around. I took him to a splash pad last week and he went nuts. He can crawl SO fast and was zooming all over the place weaving in and out of the big kids playing. We started taking a music class and he’s all about the instruments and clapping and bouncing along to the songs. We have a CD of the music we listen to in the car sometimes and I promise it sounds like he’s sining in the backseat. 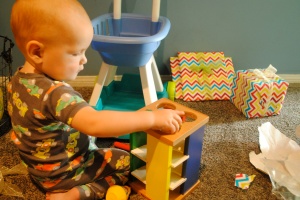 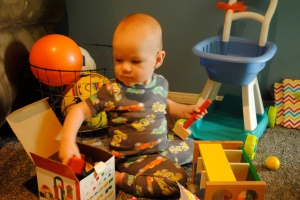 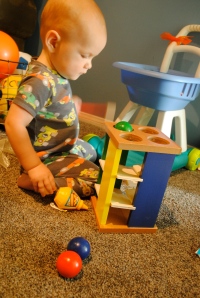 PostPartum: It took a full year, but I’m finally myself again. Like the new Mommy version of myself, but I have part of the pre-baby “me” back and it’s comforting. I know people say 9 months up and 9 months down, but it’s a full year. Not just the physical stuff – I still probably weigh more, but I think my body is about the same shape wise as I was before I got pregnant. I still get a little foggy (you know, the tired brain feeling) in the afternoon. Sometimes I’ll catch up on work and then rest for a little bit and give my mind a break when he’s napping. Emotionally I will never be the same. Motherhood has changed me in so many ways. I’m so much softer than I was, which it good. I’m more humble and relaxed in some ways. I’m also more adventurous and social since Riley and I are always trying new things and going new places.
Baby Gear: Excited to give him some new toys for his birthday. I love all the Melissa and Doug wooden toys. We’re also thinking about getting him a sandbox. We have our little swimming pool we all can jump in, and we got him a little plastic baby pool that he loves to crawl around in when I put like 2 inches of water in it. The dogs don’t mind it either – it’s like a giant water bowl for them.

Thoughts: It’s still crazy that we have a one year old baby. A toddler. I know everyone says to soak up that first year because it goes fast, and they’re right. I’m so thankful I got to spend every single day of his first year of life with him. We never were apart for more than a few hours at a time. Sure, the days are long and the years are quick. But I really, really tried to slow down and be present many times. I would stop and think about how I wanted to remember moments. His first swim lesson. Christmas Eve. First hotel stay. Sharing a snack at the park.  I’ve also realized how universal parenting and motherhood can be. It’s such a social icebreaker to see another parent and child and instantly bond over your shared experiences. I’ve never talked to more strangers in the grocery store in my life. Sure, sometimes you get advice you aren’t looking for – but most of the time it’s a comforting nod or smile from another parent that’s also in the trenches of raising tiny humans. It’s hard work, but man am I thankful for it.